Some time back, I explored using a list to help me stop procrastinating at home and work. It worked decently at work (although it lost its effectiveness over time) and didn’t work at all at home.

LifeHacker has a theory for why lists fail: we forget why we put a task on our list, so we lose the motivation to complete it.

The answer? When you make a list, also include why you need to complete the task. (This isn’t going to be applicable if you make a daily to-do at work, like “check voice mail;” it’s really for longer/more complicated tasks that require more motivation.) So, my task list at home might look like this:

(This is actually an old list. I had to redo all of the tile I laid because it wouldn’t stay stuck–and I still have a few tiles I need to re-glue–but at least it’s decent for company now.)

Something that I’ve been doing lately to motivate myself is the opposite of the task list. Rather than writing a bunch of stuff down and then marking it off (it’s very easy to overload your plate and it’s depressing if you fail), I’ve been making a list of the things I accomplish. Amazingly, I get 2-3 times more stuff done this way. And a long list of accomplishments is actually more encouraging (for me, at least) than a shorter list of things marked off. 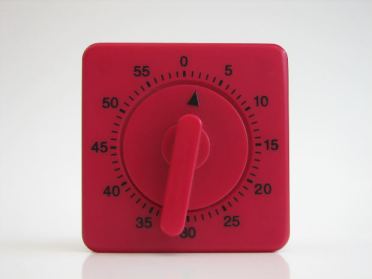 In conjunction with the accomplishment list, I work 15 minutes on, 15 minutes off. Scott H. Young has a blog post about the need to work in short bursts. If you stay on one task too long, your mind will start to wander and you actually accomplish less than if you took a short break and then got back on task refreshed. Studies have actually found that people who take periodic breaks from work to surf the web are more productive than people who keep their nose to the grindstone all day.

So, whether you’re a student studying; a writer trying to grind out a word count, edits, blog or social media posts, or marketing; or just someone who is staring at a large, unpleasant task at work that you’ve been avoiding (filing, anyone?), try 15 minutes on/15 minutes off.

Download a desktop clock from CNet or use an online version (in case you can’t d/l at work). If you’re away from your computer, use an egg timer or the timer on your stove or microwave. (And then there are those people living in the 21st century who have a timer app on their phone.)

Spend 15 minutes working hard; don’t let yourself be distracted. Then, when your timer goes off, do whatever you want–surf the internet, Facebook, Angry Birds, make a phone call, etc.–for 15 minutes. I think you’ll be surprised at how much you can accomplish in 15-minute chunks and how less unpleasant the task becomes.

As I mentioned in previous posts, I’ve been battling procrastination with the aid a reasonable task list. So how’s the experiment coming?

Not me, but my boxes look like that... minus the shelves.

I have accomplished a lot at work. I managed to catch up all the filing (two banker’s boxes full of papers which had to be integrated into 40 other storage boxes full of files). I finished cleaning out an old office, stored the old files, reclaimed some office supplies, and threw away a full trash can and a bit of recycling and part of a can of regular trash. I’ve caught up the billing and file-making. This office is looking s-h-a-r-p.

In fact, I’ve pretty much done everything I can do which is outside my usual, daily work; no more low-priority, time-consuming, boring projects hanging out in the background.

The List becomes less effective the longer you use it. It’s gotten to point that I write things down, but will ignore some of the tasks, not caring whether I get them done or not. This was especially true on the weekends (I was better about sticking to the list at work, where there are fewer distractions and I’m, you know, actually supposed to work. When I’m working for myself, pfft, I’ll blow things off.)

I suppose for some people (maybe people who are a bit compulsive) they might not get list-fatigue, but I have never been one to keep a list or a schedule or anything like that long-term. I thought that was because I was being unrealistic, but it’s probably because I’m creative and don’t like to have everything in my day planned; it allows for flexibility, in case I get in the mood to do something else. (This is the same reason why I won’t plan what I’m going to eat for dinner more than one day in advance; when I wake up, I decide what I’m in the mood for that day.)

So, I think instead of making a list every day, I need to save it for emergencies–those times when I really need to buckle down and either tackle a long-term, tedious, boring task, or I have a pile of stuff which I really need to do. Interestingly, that is the way I used to make lists. Prior to the end of the term in college, I always ended up making a list of things I had to get done before I could leave for the holidays. It ran the gamut from turning in term papers and taking exams to putting out the trash and stopping my mail. While not everything on the list got done (because I always put too much on the list and/or waited until late to start), all of the most important stuff always got done in a rush of activity that Karen Kingston calls “a white tornado.”

And, I admit, I loved the thrill and the adrenaline rush. Doing a lot of things at once makes me feel really accomplished; doing the same amount of work over a long period of time (i.e. a little bit every day) does not make me feel accomplished and does not give me a rush.

Are we starting to see why I procrastinate?

On a slightly different, but somewhat related note, is this blog post about new research showing that the longer people make decisions, the worse their decisions become (or they more they procrastinate and don’t make them). I believe they’re talking specifically about the decisions we make over the course of a day, but I believe that this probably holds true for people who make decisions day in, and day out (CEOs, judges, teachers, etc.). That’s why some countries/corporations/schools recognize the need for people to take a sabbatical; it keeps them from becoming permanently burned-out.

But, back to decision making on a daily basis. If you are aware of the fact that you tend to make worse decisions as the day gets longer (or, in my case, the procrastination level goes higher), then you can structure your day to account for it. Schedule meetings where you need to plan or make decisions for the morning. Team meetings should also be in the mornings, so the entire group isn’t making bad decisions (or making none at all). Negotiations, court cases, mediation and similar should be scheduled for the morning whenever possible. Save your afternoons for mindless tasks: filing, paying bills, handling e-mails and phone calls which do not require decisions. In fact, if you structure your day this way, you can spend your last hour getting your filing and piddly work caught up so you start the next day with a clean desk. Theoretically.