Here is another picture of me with my new ruffled veil–this time with the proper dress and hairstyle. I’m absolutely loving it!

And a quick alternate with the flat ram’s horns.

Ruffleception! This German figure is wearing two veils–one on top of the other–similar to mine, then she has a wimple that has a matching ruffle around the bottom edge. I kind of like it.

(You know, I just realized I have my medieval face on: hooded eyes, pasted-on smile.)

Well, we are officially moved and our house is officially sold! Now, on to the unpacking!

In the midst of all the chaos, I started a little project (because that’s what I do; I hoard projects like some people hoard plastic butter tubs) and I just finished it this evening. 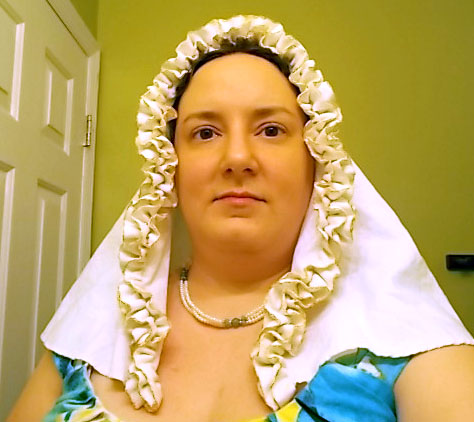 This is my (faux) 14th century ruffled veil. It’s hard to see in the picture, but all of the ruffles are edged with gold thread. (That’s what makes edges look so obvious.)

There are, as far as I have researched, three different types of 14th century veils: random ruffles (as illustrated), starched rolls, and the honeycomb.  Of the random ruffles, there is the nebula veil and something which might not be a nebula veil. 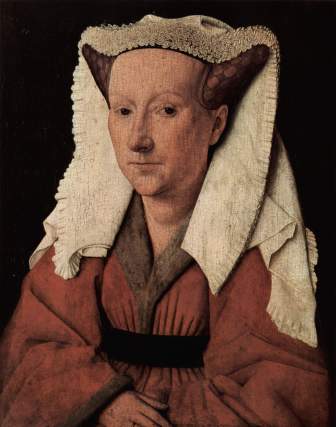 We’re almost positive that the nebula veil’s ruffles were made on the loom. The warp threads in the selvedges on either side of the fabric were loosely tensioned, while the rest of the fabric was tightly tensioned. This created a pucker or ruffle in the edge of the fabric. (One of my costume books has an essay on this subject and a recreation of the weaving technique; it works perfectly).

Nebula veils were woven out of silk or very fine linen and typically made a very narrow and thin ruffled edge. The veil would be several yards in length and it would be folded up so that multiple layers of the ruffles lay on top of one another, and that’s what created the “nebula” of ruffles around the face.

This Beauchamp weeper’s veil most closely resembles mine.

However, there are some depictions of ruffled veils that don’t look like nebula veils because the ruffles are either quite deep (meaning they stand out from the face) or quite large. The weaving technique probably didn’t produce veils with that much ruffle. It is possible that a separate ruffle was sewn onto the veil and either gathered into a random ruffle or was starched into some sort of shape.

It would appear that the sew-on-a-separate-ruffle was definitely the construction method for the rolled-edge veil. It would have then been starched into the rolls. 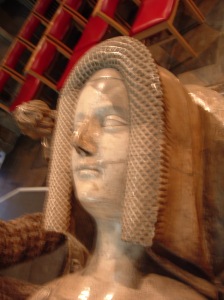 Katherine Beauchamp, Countess of Warwick, is wearing one of the more rare honeycomb-style veils. These were much more common in Germany than England. I have conjectured that they were made by smocking the middle fold of a piece of linen, then stuffed (to get that padded roll effect around the face). I have found someone else on the internet who shares that view. However, I have also seen two other people who create the same look by starching or stitching ruffles into shape.

In truth, we’re not exactly sure how they constructed most of their veils–or even if there was just one construction method for each variant. There are multiple ways to knit a sock; why not multiple ways to construct a veil?

This medieval veil had the ruffles sewn into place, not gathered then stitched down. Also, the medieval examples use a woven tape, not a hemmed piece of fabric, like Cristiana and I used. This probably cut down on some of the thickness of the ruffles and may have made them stiffer and more likely to hold their shape.

For my veil, I used Cristiana de Huntington’s 10-hour Veil method. She calls it a cheat–because, instead of gathering the ruffle onto the veil and starching it, she sews it on so that it makes the rolls without a need to starch–but according to one of her documentary photos, ruffle edging could be sewn on so that it formed a distinctive shape (in this case, V’s) without the need for starch.

The nice thing about not needing to starch is that if you live in a humid climate (which Tennessee is), you don’t have to worry about your starch going limp and your ruffles falling out.

I will admit, my veil did not come out the way I intended (does any project, really?). Cristiana’s veils have a crisp, very obvious V-edge. When I did my first edge, it didn’t look like that at all. It might be that I didn’t sew it correctly, but, more likely, it’s because she was using a very crisp, stiff linen, whereas mine is a soft, garment linen.

When I put my first edge on, I still had gobs of edging left (I’m still not sure how I ended up with so much, since I followed the directions), so I said “what the heck,” and I did a second layer next to the first. Then another. Finally, on my fourth time across, I used up the last of my edging. So that’s how it came to be. And even if it didn’t come out looking like it was supposed to, it’s more or less constructed in a period fashion (even the gold trim on the edges is documentable), and it’s pretty; I can’t wait to wear it to an event.