Worse, most writers do not write $80 books (although most cheaper books sell many more copies). One paperback fiction writer–who was on the NY Times Bestseller list, no less–estimated that she made about $30,000 – $35,000 a year in income, after accounting for her work-related expenses and self-employment taxes. She had to write at least one book a year to keep it up, since you don’t start getting royalties (if any) until after your advance is repaid, and, of course a book’s popularity declines the older it gets, so some authors never make anything other than their advance. So don’t expect to live off those royalties. If you’re lucky, they may–one day–cover your operating expenses for the year.

I was telling my dad–a professional comedian–that the future of music, books, and comedy is not the actual product. People expect electronic media (be that an e-book or an mp3) to be cheap, and there’s no way anyone is ever going to effectively block piracy. Instead, we’re going to have to be like professional athletes–getting some money for a brief burst of work, but making our actual living from endorsements, movies, speaking engagements, and merchandising. In short, you have to sell your image.

Look at Paris Hilton. What’s she famous for? There are plenty of rich people who aren’t famous. She has cultivated an image and sells it. If she can cultivate an image from nothing (having no talent for anything that I can see, except marketing), then surely people with talent can also cultivate enough of an image to make a decent, middle-class living. 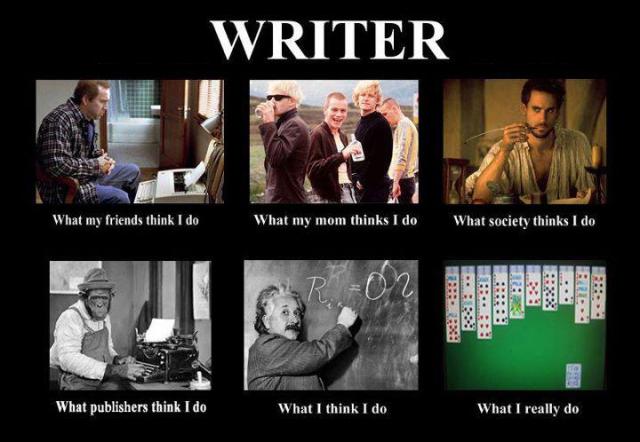 While I will confess to blowing time with Solitare and other games (it sharpens my mind, honest!), this is a more accurate picture of what I really do:

(And for the record, no, that’s not my actual desk. Although I did have to take some time this weekend to clear a path TO my desk. The top of the desk is still buried, though.)

And, finally, for all you introverts out there (or people who try to understand us): Misreading introverts.