I picked up a Nora Roberts book at the Goodwill the other night. I just had to read something by this woman who has produced 200 novels and sold millions of books.

What’s more, the book I found features vampires in medieval Ireland. It’s like all my favorite things thrown together in one novel. It has to be a winner!

But I’m a few pages in and I’m coming up disappointed. She used the word “slicked” three times in three pages. Flaw number two: using “slicked” in incorrect/inappropriate ways. (Ex: “She slicked her hand over the bloody wound.” How do you slick your hand?) After three pages, I’ve come to the conclusion that “slicked” is one of those words that should be on my list of words you should never use in a romance novel.

My next grievance: This is set in Ireland in 1128. She refers to thunder as the sound of a thousand cannons. Cannon didn’t exist at that time. I consulted my husband–the medieval arms, armor, and warfare expert–and he said bombard cannon were in limited use by the late 1200’s and were used exclusively as siege equipment. (Like trebuchets and catapults, they were used to break holes into castle walls.) The first recorded use of a cannon on a battlefield (meaning used against people, not walls) was the battle of Crecy in 1346. Needless to say, no one in 1128 Ireland knew what a cannon sounded like.

And here’s yet another anachronism: Lilith is wearing a bodice with her breasts rounding over the top.

Being a medieval reenactor, with a specialty in costume research, bad costuming in movies (and books) enrages me. I mean, we’re talking postal-level rage. Walmart-on-Christmas-Eve-level rage.

Here’s the look of a renaissance corset.

“Bodices”–those things you see at renaissance fairs that are just a corset worn on the outside of the clothes–DID NOT EXIST AT ANY TIME IN THE MIDDLE AGES. Corsets weren’t invented until some point during the Tudor or early Elizabethan era. And even then, they were only worn on the inside (they were underwear!), and they didn’t work like the Victorian corset. There were no wasp-waisted women in the renaissance. It actually gave you a tubular shape. 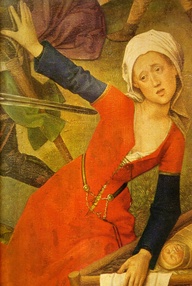 Prior to that, breasts were not on display until the late 1300’s, when the gothic fitted dress (a cotehardie variant) lifted the breasts and cut the neckline low. Earlier cotehardies actually flattened the breasts (like a sports bra), and while they sometimes had wide necklines (some Bohemian examples were off the shoulder), they were not low-cut. No breasts were ever on display prior to the late 1300’s.

Here is what Lilith should have been wearing in 1128:

This is from the Bayeux Tapestry. The Tapestry was commissioned after the battle of Hastings (in 1066), but because clothing styles were so slow to change, we can be reasonably confident that it accurately depicts the clothing of the late 11th century and into the early 12th century.

This particular woman is dressed as a Saxon. As we can see, there is no sign of a bodice, and we’re about as far away from revealing breasts as a nun’s habit.

I would have also accepted as accurate a description of Norman clothing, which was seen in England after 1066 (although it took some time for it to catch on among the conquered Saxons).

Irish clothing sometimes followed its own design, sometimes followed European design (the Moy gown doesn’t look like any known English cotehardies, but does look like the dresses seen in Flemish paintings), and sometimes followed English fashion, albeit 50-100 years late. In many cases, we really don’t know what the Irish were wearing because the Irish didn’t draw or paint very much. And, unfortunately, our other great source of costuming information, tomb effigies, were largely destroyed by Cromwell.

When in doubt, though, it’s generally safe to go with English clothing when depicting early medieval Irish people (by the 1400’s, we start to have an idea of what they were wearing, based on English descriptions and the occasional sketch).

And I haven’t even mentioned another flaw I’m finding in Ms. Robert’s writing: incomplete sentences. Sure, everyone uses them from time to time for emphasis. But as Dena has pointed out repeatedly on Reasoning with Vampires, “from time to time” is the key phrase. Using an incomplete sentence every other paragraph doesn’t have any punch; it just looks like you have bad grammar.

Also, she has unnecessary commas. Now, look, I love me some commas–more than the average person–and there are plenty of times where commas are optional, but I’ve found many commas in Ms. Robert’s novel that just shouldn’t be there.

I don’t expect literary excellence from someone who churns out more than 5 books a year, but that’s no excuse for poor word choice and bad grammar. At the very least, that’s what editors are for. But maybe when you get famous enough, they don’t bother to correct anything but obvious typos.