Are you gearing up for NaNo? Do you know what you’re doing?

Arghhhhh!!! No! Help Me With My Novel!

1. Brainstorm using the MACE or snowflake method. (You can do these independently or combine them with the plot cards in the next step.)

2. If you haven’t plotted your story yet, grab a deck of tarot cards, the free 1936 plot cards, or your Story Forge Plot Cards (I really recommend these). Heck, you can even use online tarot cards.

If you’re using your own tarot cards, you can use the usual spreads (basically do a tarot reading for your protagonist and any major secondary characters or the antagonist), or you can make up your own spread with the idea of creating a story.

Here’s a basic one:

Shuffle both piles. Deal at lease two cards out of pile #1. These can represent your protagonist and antagonist. If you don’t want an antagonist, one of the cards can represent a major secondary character (best friend, parent, etc.), or it can represent your protagonist’s dark side–he is his own worst enemy. If you need to, you can reverse the cards to get one positive personality and one negative personality. Draw more cards if you want more characters. It doesn’t matter which card is which character–choose whatever seems good to you.

By this time, you probably have some idea of how all of these characters and their lives can interact, but you can always draw another card from pile #2 to suggest an incident that ties everyone together. You can also draw cards to link the minor characters to each other.

Remember: The purpose of the plot cards is to suggest a story to you. You don’t have to use every card. You can draw alternate cards if you don’t like what you drew the first time. They don’t dictate what your story is; they just give you an idea to start with.

Example: I used the 1936 cards to plot a short story. The location was “a canyon,” but the rest of the cards suggested a controlling man and a relationship gone bad. I got an idea to make my characters hoarders and the setting was in their hoarded house (the story then becomes about the protagonist realizing that she’s not only unhappy with her life, but the biggest piece of clutter she has in the house is her husband). I put a nod to the “canyon” suggestion in the house, though, when I mention their junk towering in the living room like mountains with a little goat path running through it.

In other words, they do live in a canyon–a canyon of junk.

So, don’t be afraid to think way outside the box, use card suggestions as metaphors instead of literally, and go off script. Because there is no script; there is only your imagination.

1. A lot of NaNo bloggers advocate spending the last weekend in October pre-cooking meals so you don’t have to waste a precious hour every evening cooking and don’t get stuck eating a lot of expensive (and bad-for-you) takeout. 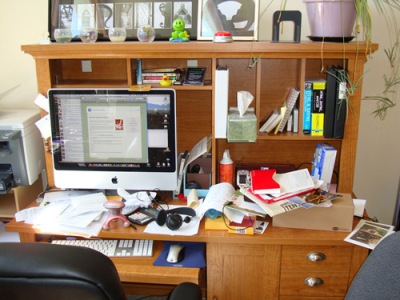 Don’t start out like this. It will only get worse.

2. You might want to give your house a bit of a clean on that last weekend in October, too, because, unless you’re a neat-freak or turn to cleaning as a way of procrastinating, your housekeeping is going to go by the wayside in November. Try Flylady’s Emergency Clean Up List for help.

Even if you don’t give your house a once-over (I really think you should), do at least start with a clean, organized desk, stocked with scratch paper, pens, and some sort of calendar. This will give you space to write yourself notes, eat (oh, yeah, you’ll be doing that at your desk), and lay all of your research materials. If you start with a messy desk, the pile will only get worse and you’ll waste time looking for your lost notes and office supplies.

3. I’ve also seen it recommended that you put together some music to write by. I strongly recommend that you listen to wordless music while writing, because it can be hard to make up your own words when someone is screaming theirs in your ears. Try some of Pandora’s stations like spa radio, nature sounds, or piano or classical music. (Personally, I like Enya and new age-type music.)

In addition to this, though, you might want to compile some music to set the mood. Sometimes you need to get emotional while writing a scene, or maybe certain songs make you think of your characters or plot and you want to listen to them while you’re not writing (e.g. while you’re commuting) to keep you thinking and in the mood.

For instance, over on YouTube I have Cryin Music, Fightin Music, and a playlist just for Acceptance (I have started some other mood lists on my YouTube channel in case you’re interested).

4. Place pens and paper in strategic places. Michelle Proulx suggests taking the reading material out of the bathroom and replacing it with a notebook and paper. I like to keep a notebook beside my bed and in the car for when I get a great idea or great dialogue is running through my head. (If I don’t write it down ASAP, my brain will erase it.) You might want a notebook at work, or you might put a small notepad in your pocketbook or carry it in your pants pocket.

1. Get on the NaNo forums for help and encouragement and commiseration. Also, most metropolitan areas have a local NaNo group. I’ve been to several meetings over the past few years, and everyone in my group has been very nice. And it’s like introverts’ paradise; I think everyone in my group is an introvert, which means it’s perfectly okay to not make eye contact with anyone else.

While the forums are great, don’t dismiss the benefits of in-person meetings to help keep you on schedule, get past writing blocks, critique your work, and to form networks for the future.

2. Use these tips to keep your writing going when you get stuck (and make it good).

3. I found this awesome writing planner if you need help planning writing goals (works well post-NaNo to keep you writing and editing).

4. Scott H. Young has all sort of tips on his blog about getting more done in less time. In today’s newsletter, he talked about the fact that energy (willpower) is something which is finite. (I had similar thoughts about energy a while back.) Rather than telling yourself that you’re going to study or work on some project all day, it’s better to schedule small blocks of time and then stop.

If you want to do 50,000 words in a month, then you need to average 1,666 words per day. That’s approximately three 8.5 x 11″ pages. Just three pages of writing… doesn’t sound like too much, does it? How long do you think it would take you to write that if you knew ahead of time what you wanted to write? An hour?

If you have a lot of time constraints in your life (full-time job, small children, etc.) schedule yourself a time to write every day. Working in the morning, before everyone gets up, might be your best bet, but maybe you could get in an hour after the kids go to bed, or write during your lunch hour. Whatever it is, make your writing time sacred (“Do not disturb me between these hours unless the house is on fire or someone’s dead”) and when your time is up, stop–even if you haven’t met your quota.

Click pic for a link to a good blog on dealing with stress and finding work/life balance.

That sounds counter-intuitive, but if you’re so stuck you can’t write three pages in an hour (or however much time you allot), you’re not likely to get anything useful out of another hour (or three). Your mind is probably just going to wander and you’re going to sit there playing Solitaire. You might as well give up the enterprise for the day and do something useful with your time.

When you’re not writing, be thinking about what you’re going to write next. This is why you stashed notepaper everywhere before NaNo started: when you get an idea, write it down and save if for your writing time. The hope is that you’ll be mentally prepared for your writing time, so when it’s time, you will be able to sit down and do nothing but write.

(Personally, I’m of the opinion that if you’re on a roll, it’s okay to go past your writing time. Just recognize that, once you run out of steam, you need to quit. Don’t keep sitting there staring at the screen or goofing off.)

Because you might not meet your quota every day, you might want to schedule an extra session during the week. This will probably be on the weekend, when you have more time, but maybe your spouse and kids would like to go out one night during the week and give you an extra hour or two home alone, and this can serve as your make up time. Or maybe you will go out to the weekly NaNo write-in, which usually lasts 2-3 hours. (And, even if you get stuck, you can talk to people who might get you unstuck.)

Speaking of stuck: don’t be afraid to skip around. I almost never write from beginning to end; I write as I have ideas, then patch them together into a quilt later. So if your current scene is dead in the water, but you have an idea for something that will happen later in the storyline, go ahead and start it. Working into the future can help give you ideas for the past, because the past will need to be constructed to set up the future.

5. To keep yourself on task (and to make yourself quit when it’s time), try using a timer. You can use an online timer or download one to your desktop (I just d/led this one and I already like it; I’ve been using the online version for years) . If you’re writing on paper, use an egg timer, your cell phone (most have a timer widget), or, if you’re in hearing range, the timer on your stove or microwave.

If an hour seems like a really long time to sit still and write, break it up. Spend 30 minutes–or even 15 minutes–writing, then take a 15 minute break. Use your break time to socialize online, do research, or just get up and walk around.

3 comments on “Get Your NaNo Game Plan Here!”