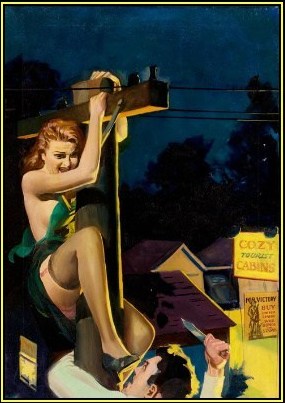 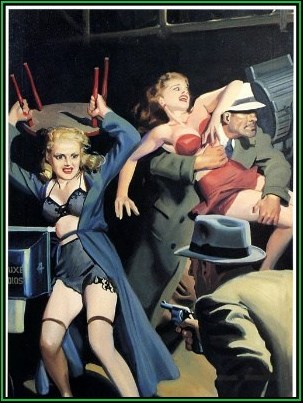 I’ve noticed several recent Demotivational posters which featured 1940’s-50’s book art, and I have to admit it makes me want to write a story that would feature such a cover. (I love how the strapless dresses are glued on. No wardrobe malfunctions here!)

I need a heroine in high heels, full skirt, and a bullet bra. I need a hero in a three-piece suit, fedora, and shoes so shiny, he can see his face in them. 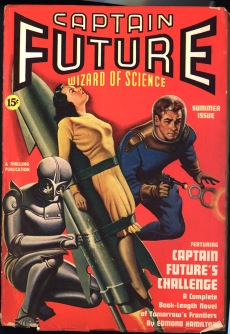 The thing is, I don’t know how interested I’d actually be in setting the story in the 40’s or 50’s. I have some interest in WWII history, but none at all in 1950’s history. Maybe I just need an alternate universe where those things are still common. Maybe a futuristic world as people in the 50’s imagined it, with flying cars, robots, and silver lamé space suits. And maybe the robots will become sentient and start plotting to take over. And only Wallace and Priscilla–thrown together by circumstance–can save humanity’s moon-colony.

It’d be like steampunk, except with rocket-everything instead of steam-everything. And you’d be left wondering if it’s actually supposed to be taken seriously as a warning against modern technology, or if it’s an Austin Powers-like spoof on old sci-fi.

Hmm, that has potential. I’ll have to add it to my list of things to write. I might also have to do some reading up on period science fiction. Can’t spoof it if I don’t know what it is.