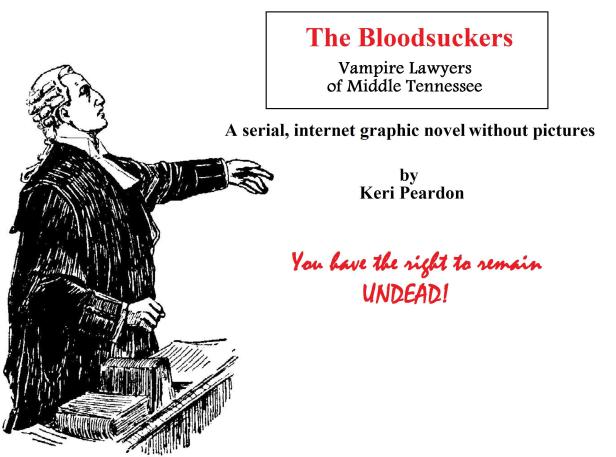 Shirley insisted on escorting Scott back to his office. She kept up a constant stream of conversation all the while—mainly on the difficulty of dealing with vampire prisoners, and how much time Bennett was now looking at after assaulting Scott and threatening a judge.

Scott just nodded a little and made an occasional sound to show that he was paying attention. He wasn’t in pain anymore, and he seemed to have stopped bleeding, but the entire episode had left him nervous and upset.

Josie glanced up when they walked into the building, then jumped to her feet. “Mr. Cunningham, what happened?!”

“We had an inmate show his ass in court today,” Shirley said, pushing Scott into one of the arm chairs in front of Josie’s desk. “Mr. Cunningham probably saved the judge’s life.”

Josie knelt down in front of Scott, looking deeply concerned. “Oh, what happened?”

Shirley related the entire incident. And either she embellished to make it sound more dramatic, or it really had been that frightening to the witnesses. It didn’t bear thinking about, really.

Josie looked up at him, concerned. “Thank goodness you were there.”

“I didn’t even think about it,” he admitted. “It just… happened. I don’t feel like I did anything.”

Shirley patted him on the shoulder. “It’s called instincts, baby. Some people got ‘em and some people don’t. And I can tell you, being on the police force, you always want to be partnered with someone who has ‘em.”

After reassuring Shirley—several times—that he was okay, she finally departed. Josie got some paper towels from the kitchen and began washing the blood from his face. He would have protested, but he honestly wasn’t sure if he could do it himself.

She touched his shoulder. “You’re shaking like a leaf.”

“I’ve… never been in a fight before,” he admitted.

She smiled at him. “Well, it’s like officer said, you obviously have good instincts.”

“I don’t know about that. I wouldn’t bet on me if it happened a second time.”

It took him a moment to realize she was untying his tie. “What are you doing?” he asked, startled.

“You have blood on your shirt collar. You’re going to have to get it in some cold water right now, or it will never come out.”

Scott felt awkward, but Josie insisted on taking care of his shirt for him. So he stripped out of it and went downstairs to put on another one.

“Do you want me to cancel your one o’clock appointment?” she asked him when he came back upstairs. He watched as she submersed his shirt in the kitchen sink.

“Are you sure? I can move it to tomorrow or whenever.”

Scott was just starting to calm down when Josie showed his one o’clock appointment into his office. “This is Mrs. Stanley,” she announced.

He could tell immediately that she was a vampire—she had that peculiar scent which smelled rather like dirt and old things—so he stood and offered her his hand. “Good evening, Mrs. Stanley.”

She shook his hand; her grip was weak and timid, and she broke off contact quickly. “It’s nice to meet you, Mr. Cunningham.”

“Please, have a seat,” he said, gesturing for her to sit in the arm chair across from his desk.

He took his seat, too. “So, Mrs. Stanley, what can I help you with today?”

“My ex-husband won’t leave me alone,” she said in a quiet voice.

“He calls me constantly—I mean, ten, twenty times a day. I blocked his number, but when I go a few days without answering, he’ll start calling me from a different phone. He borrows other people’s phones or gets a calling card and uses a pay phone. And, of course, I can’t hide from him—not with vampire registration.”

The State of Tennessee, early in the post-meltdown days, had rushed to pass legislation to force all vampires to register with the local authorities—just like sex offenders. They weren’t regulated in where they could live, but the registry was public, so there was no hiding your status. They were also forbidden to leave the state, and the seven surrounding states made it a crime for vampires to cross their borders. The fight over such laws constitutionality was steadily creeping towards the Supreme Court.

“Tom Whitsell did my divorce,” Mrs. Stanley continued. “I’ve already been to him, but he said there wasn’t anything he could do. He was the one who suggested I come to you. He said you might know more about vampire’s rights.”

Scott was confused. “Why did he think he couldn’t help you? It sounds like a simple case of harassment to me. You ought to be able to just go to the police and get a restraining order against him.”

“I’ve already been to them,” she said wearily. “I can’t get a restraining order or order of protection because the justice will only issue one if I feel my life is threatened. And since I can’t die, my life is never threatened.”

Scott gaped at her in disbelief. “You have got to be kidding me,” he finally said. “Surely this comes under harassment or stalking laws.”

“Apparently not. Again, I can’t be threatened.”

“I’m going to have to look into that. Surely I can find some way to get him.”

He was thoughtful for a moment. “Maybe contempt?” he muttered to himself.

He looked at her. “Can you bring me copies of your divorce papers? Everything that was signed? There might be something in there that will allow me to get him for contempt under your divorce.”

“I’ll bring you a copy; I have everything Tom ever gave me copies of.”

“How much will this cost? Or do you charge by the hour?”

Scott had almost forgotten about setting a payment. This could possibly be his first paying client—not counting his public defense.

He considered her question for a moment. “$1,500 to investigate it, do the paperwork, and take it to court, if necessary. Of course, if I can get him with contempt, we can ask for attorney’s fees, and if we win, he’ll have to reimburse you.”

“Would you… accept payments? My divorce kind of wiped me out.”

“How long has it been since you got divorced?”

“How long has your ex been calling to harass you?”

“Oh, since I moved out. He didn’t want a divorce. But…” she looked down. “He was abusive,” she admitted guiltily. “I just got tired of it. And… I was afraid I would do something,” she whispered.

Scott leaned forward a little, trying to hear better. “Do what?” he asked.

“I was afraid I’d lose my temper one day and hurt him. I… I know it’s easy for us to kill someone.”

Scott nodded a little. Normally he didn’t have to worry about controlling his strength, but when angry or threatened, it was easy for a vampire to lose control and go too far.

“I thought, once the divorce was final, that he’d quit, but he hasn’t.”

“What does he say when he calls?”

“Threatens you with what?”

“He’ll say things like, ‘I’m going to pop you in your big mouth,’ or he’ll say more vague things, like I need to be put in my place.”

“And… you told the police this?”

“But they don’t consider that threatening?”

“They said there wasn’t any risk.”

“Just because he can’t kill you doesn’t mean he can’t hurt you.”

Scott sighed unhappily, leaning back in his chair. “I’ll work with you on paying my fee. What can you do?”

“Tell you what: bring me $100 this Friday and pay $50 a week until you get it paid off, okay? If we manage to stick him with the fees, then you won’t have to even worry about paying the rest of it off; he’ll have to do that.”

Scott saw tears well up in her eyes. “I really appreciate you working with me, Mr. Cunningham.”

He stood up and offered his hand again. “I’ve been divorced and with nothing to my name, so I can understand your position—at least in regards to finances.”

She shook his hand again—this time with a little more confidence. “Thank you,” she said.

The next evening, as he was getting dressed for work, Scott heard Attorney Rutherford’s voice booming upstairs. Curious as to why he was at work so late—he had confessed that he rarely worked past 3:00 PM—Scott hurried upstairs.

“There’s the man!” Rutherford said when Scott appeared in the lobby. He walked over to Scott and put his arm around his shoulders.

“You are the talk of the town today,” Rutherford informed Scott.

“I don’t think it was that serious….”

“I heard you got bloodied. That sounds pretty serious to me.”

“It wasn’t anything really bad.”

Rutherford grinned at him, then looked at Josie. “He’s modest, isn’t he?”

Rutherford patted Scott on the shoulder. “Why don’t you let me take you around town and introduce you to a few people?”

Scott glanced at Josie. “You don’t have anyone for an hour,” she told him.

“Please! Call me Jim,” he insisted. “One thing you need to learn, Scott, is that people aren’t much on formality around here.”

Jim took Scott to the courthouse and introduced him to Judge Standiff—the vampire Circuit Court judge who handled civil, criminal, and juvenile cases for a five-county radius. Then he introduced him to the county’s D.A.—a human—plus the skeleton crew—also mostly human—who handled the court’s business at night. He also met a number of deputies and officers. Scott got the impression that many of the people he was meeting were purposefully hanging around, just so they could meet him. It was like a barrier had been breached. He was one of them.